Regrettably, i am partial to a time loop. The same thing sung over and over, mantra-like, induces a transcendental state in me–like waiting for Christmas.

“I Can’t Wait for Christmas” is the entire libretto for this ’90s pop slow-build garage chant o’ happiness. King Everything makes the point stick. I mean, wow.

Expanding on our theme Vince Vance conducts cheerful children in a choir of “Can’t Wait ’till Christmas Day.” There’s a real churchy song in here (amidst all the greediness), but that redundant chorus hammers home the message. Ow.

This is such a sub-niche of micro-genre, let’s wind up with a redundant melody, but REAL SURFER VIBE. Laurie Biagini conquers the big wave (wait?) with “Can’t Wait for Christmas.” Cowa-blitzen!

Kidsong from Phil and the Osophers in the drummer boy driven “Decorate the Christmas Tree.” Special attention to each ornament makes Mommy and Daddy happy.

Can Plank Road help? “Decorate the Tree” is funny jazz noodling for the undeveloped chorale.

Need a break? Here’s the family made musical play ‘The Christmas Stranger’ song “Decorate the Tree” with all the children, talented or otherwise impressed into the stormy show tune.

For Nichol & Wilde, to “Hang a Decoration on the Christmas Tree” is to have a party. This ’50s girl rock inspired electronica is only a party in low gear. No one’s branch-diving here.

Throwback Day! As previously hailed, awesome Xmas parody band The ’60s Invasion takes on the Lemon Pipers’ 1967 ‘Green Tambourine’ with their “Green Christmas Tree.” My brand of hilarity with ornaments.

Let’s foreclose our popular music songs about snowmen with what the kids call the latest thing.

“Big Snowman” from Navarro plays alt with our ices. Protect your hearts, ‘migos.

Dale and the Deadheads narrate a long ago time when snow came down like snow. “Bill, the Snowman” is a beatnik throwback comedy bit worth a party play.

Guided by Voices, did i tell you this already, drop “Doughnut for a Snowman” as prog rock pretty pop. I can’t remember what i was talking about….

Dreamy psychedelia, “The Waving Snowman,” make The Wytches the band to watch.

Gregory Scott Slay bases his “Visit with a Snowman” on a visit with a snowman. More psychedelic rock with a metal backbeat. Snowman laid down this track, too. BLUE ALERT

Angry but oh so danceable is the punk BLUE ALERT “Viki is a Snowman.” The Jims holler largely for one minute.

Nihilistic pop from The Naked Picassos warns about that watching “Snowman.” Run, kids.

Pop mixed media allows Strangejuice to get sentimental, yet surreal, with their “Snowman.”

Pop punk garage by Go Eat Worms make “vs. the Snowman” a saga of surprising power.

Angry garage separates “Snowman” into three round balls. The Fezz throws gas on the fire of mujsic.

Emo garage from Kenzi Gregory unravels joy with “My Snowman.” Well, more than one. They don’t last. Hate my life.

Grrl garage pounding from The Ravens. “Evil Frosty Snowman” is not what you think it is.

Banging garage metal from Nothing to Envy portrays “Yeltsin the Snowman” as a scary monster. Surprized?

Record label Flying Bomb has been an outlet for punk, garage, experimental music since the ’90s. White Stripes got their toehold to success here. Now let’s dip into their phenomenal Xmas compilation from ’02. Happy Supply’s “Young Snowman Got It Bad, ‘Cause He’s So Round” puts the frozen one back on the street, in a cheerful love song. 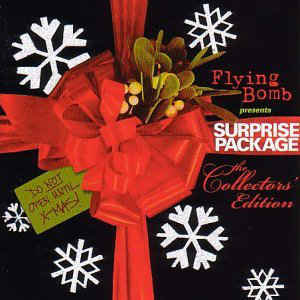 This comes by way of good buddy Pete the Elf.

Alcoholics have to make nice, or at least spew the other direction, during the holidays.

Uncle John brings the Christmas miracle in The Mcdrinkers’ “Drunk on Christmas.” Celtic punk has cobblestone cred. And the boys do indeed rock.

Melancholic becomes the mindset of the mostly muzzy, as evinced by Michael C. Pearson in “My Beerdrunk Soul Is Sadder Than All the Dead Christmas Trees of the World.” It’s unplugged psychedelia, haunting and hurting.

King Automatic and Rich Deluxe jam some surf guitar into their crooning carol “Stay Drunk at Christmas.” It lends a secret agent vibe to an odd mix of Scary Father Christmas footage among the hard living Gauls and Deutsche in the ’60s. Dipsomania seems the norm, sad to say.

Well, if it’s not you, not love… how ’bout–anybody? Any two legs off the street? Desperate times are often represented on Santa’s list.

Awkward poser Jack Douglass tells you all about it in “All I Want for Christmas is a Girlfriend.” Do you copy? He’s not picky.

The Refreshments are also unparticular when they claim “I Want a New Baby for Christmas.” Guess as long as it’s not the old baby…. Rollickin’ jerry lee piano, but not exactly rock.

Slightly more picky is Bigg Robb who claims “I Want a Big Woman for Christmas.” This is a bit dull-witted, and largely spoken word (not on my blog)… but Robb tries so hard. I mean, he doesn’t even swear. Ups, my man.

Higher standards are espoused by Jonas Brothers who individually rock out “All I Want for Christmas is the Girl of My Dreams.” They’re going to get her, too. If they weren’t so adorable, i’d call the cops.

The New Edition is very specific when they chant like ballad-bots “All I Want for Christmas is My Girl.” It’s cult-astir! (I suspect you shouldn’t give her to them, not with that weird theremin electronic bit.) Is “candy girl” code for something really wrong?

The Knickerbockers surf us back to the ’60s with “I Want a Girl for Christmas.” It sounds so harmless with harmony like that. Not like human trafficking at all.

Meshugga Beach Party has also cashed in on the surfer craze in the last ten years. These Bay Area bagels rock instrumentally for the most part. (I like “Go Go Golem” and visualize drag racing through the back ways of Marin County.) But we’re here to race, so please have patience with “Hot Rod Hanukkah,” the titular tune off their 2011 album. It’s slow to start. And to lap. And to finish. It takes eight nights.

Time to slow it down and listen to the hemi purr.

Malibooz were 1960s surf rock from the East coast. they only lasted a couple years, but so did surf rock. Despite going separate ways, the boys were drawn together to compose original surfer tunes for movies in the late ’80s and early ’90s. Then surf movies became more of the zeitgeist of the ’00s: Malibooz returned. Good for them. Their Christmas album A Malibu Kind of Christmas from 1992 has unfortunate wipe-outs to the tune of ‘Rudolph’ and ‘Drummer Boy.’ Original jams like upbeat “Santa Man” and downer “Christmastide” serve them much better.

Today we’re concerned with “Santa Drives a Super Stock Dodge.” It comes across as more pretty than roaring Tom Petty, but the young harmony back ups and awkward ad lib shout outs personalize the piece. One of a kind.

El Vez sings of love, loss, and the blues with his “Christmas Wish.”

Pete the Elf had to clue me to listen to the last second of the song to get the point blank point. Thanks, man.