Now that we’ve treated the musicians who have treated us, take a cue from that last magnificent number and honor the images from our TVs and screens: the real stars of the American scene: actors.

Marion Mitchell Morrison was an instant movie star after nearly ten years of work. He headlined westerns through the ’40s, ’50s, and ’60s, eventually falling into an old man icon in TV skits in time for the counter culture to reject him as The Man. In retrospect he stands tall in the saddle, a American hero who’d rather explain it to you with his fists than his mumbling.

Rebecca Perschbacher sings “I Want John Wayne for Christmas” as a true fan. 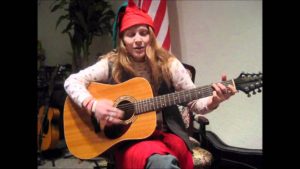