On the other hand, Santa seeming omnipresent may overload our senses to the point whereas the small minded may discount any of his presence due to his inconceivability.

A few songs, then, out of pity, for those deniers who believe Santa’s job is to be nothing.

BLUE ALERT. Nick Helm, comically competing on some singing show, lets his anger out a crack at the revelation that “There Ain’t No Fucking Santa Claus.” Hard rocking, hard feelings.

BLUE ALERT. Driller profanely rages metal against the milk and cookies with their “There’s No Santa Claus.” Even though he doesn’t exist, i think they’d kill him. Jesus, too.

BLUE ALERT. Trick Daddy raps the quandary colorfully with “Ain’t No Santa.” Hrm, maybe this is just a PSA directing kids to believe or end up dead nigas.

Perhaps too drunk to realize what they’re saying The Damned report “There Ain’t No Sanity Clause.” We may have crossed over into more personal garage rock issues.

Let’s stay prog rock and explore the possibility that we’ve merely misplaced the Wise Winterman. Captain Beefheart inspects whether or not “There’s No Santa on the Evening Stage.” It’s the blues.

Ron Holden and the Thunderbirds got it figured out. When they ask “Who Sez There Ain’t No Santy Claus?” they mean: who wants to have a horrible, empty life spiraling downward into doom. Rock the doo wop here and BELIEVE.

Santa’s secondary job, like Dr. Who’s, is to fold space-time so he can be everywhere at the same moment. He seems to be multiple copies of himself–but that’s our limited perception forcing our paradigm on his magic.

The Peter Pan Carolers explain their shock that there are “Ten Thousand Santa Clauses,” but never fear–they’ll blink them away.

The more adult perspective comes from Bob Rivers who, natch, turns ‘Here Comes’ to “There’s Another Santa Claus.” Yes, very clever. But you seem to be racist, Bob.

The appropriate response to “Too Many Santas” is awe and stupefaction. Although The Bobs collapse into cynicism, they do it with love. Rock steady. 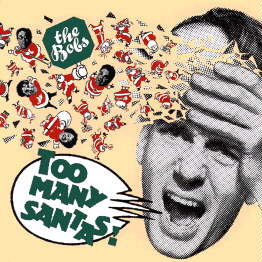 I guess Santa makes a great decoration, he could make some extra scratch hiring out as a nativity scarecrow or something…

Please welcome the joys of The Christmas Jug Band (featuring lead Paul Rogers here) with there DIY instructions what to do with your jolly old elf in “Plant a Santa.” Grow a little merry tonight!

Is Kris bigger than all of these mundane human endeavors? Is he really gonna blow you all away?

Learn from Bah and the Humbugs through the story of “Hurricane Santa.” It’s lounge-tatic for a doomsday. 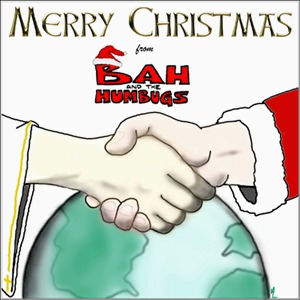 Is Santa his real name? Is it Kris? Or Billy?

We may not ever know who this guy is.

Here are some guesses who he could actually be in his spare time.

Of course Bob Rivers has an opinion. He claims, in his best der Bingle, that “There’s a Santa Who Looks a Lot Like Elvis” down at the K-Mart store. Wait, who’s standing in for whom?

Ralph Garman similarly wonders who the real Marshall Bruce Mathers III is in his Kevin and Bean radio parody “The Real Slim Santa.” It’s a shady present no matter how you rap it.

Lee Stranger gets rock and revival with his electric “I Wanted Christ and You Gave Me Santa Claus.” Are you sure they’re two different people? I’ve never seen them together….

If out of work, Santa could pick up some training at the local community college, i’m sure.

But the consequences could be dire–

Herein lies the lesson: Casey McKinnon warns of the resulting nihilism often resulting from liberal arts classes in her bouncy fun pop tune: “Santa is an Atheist.” Well, he didn’t start out as one but, see, what happened…

If Santa loses his job, he probably got sued out of it. Maybe he should get more comfortable in a courtroom (not just on 34th Street).

As defendent, Santa also had to put up with dumb old Dr. Elmo who gratuitously stretched out his success of ‘Grandma Got Run Over’ with “Grandpa’s Gonna Sue the Pants Off of Santa.” The Caribbean beat is a nice touch, but this is novelty by the numbers.

Lawrence Savell has quite a little sidebar writing and singing about legal hijinx. His “I Dreamed I Saw Santa Working in the Library” is one of his better electronic folk numbers, though if you listen to it, he’ll probably bill you.

If Big Nick ever picked another job, it would be because he was adventurous, whimsical, reinventing himself–right? Right?!

Jeremy Lister posits this worst case scenario with “Santa’s Lost His Mojo.” Fortunately this is only a cry for help, so all you rotten ingrates will appreciate him again. Enjoy his pop rocker but think about what you did.

Theocracy tells the story we don’t want to hear the night before: the economy dragged Santa down to the coal mines in their “All I Want for Christmas.” BTW all they want for Christmas, despite their hair metal, is ‘their old job back.’ Makes you think.

Odds Bodkin gets more serious with an old school folk protest song jollied up children-style. “The Takeover Before Christmas” does unwind an epic yarn, but make sure you’ve got arms on your chair to clench and an edge upon which to sit. Santa gets run out of work by Big Toy and forced into early retirement. But… keep listening… that Christmas magic isn’t done with our favorite fatman…. 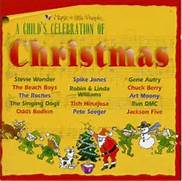 Surely Santa would get a professional set up! He would never just get run out of the skills market!

Well, if you can dream it, Jimmy Fallon can joke-sing it. His “Santa Claus Got a Second Job” has fun with pop music but the message is too tragic to really dance to. Regrets come AFTER Xmas.

More appropiately, Warren Baker takes his lyrics off amiright.com and plugs them into a karaoke machine (to the tune of ‘Grandma Got Run Over’) with “Santa Dumped His Job, Now He’s a Cashier.” This is the low-class, piece of trash parody we expect for the topic.

Santa’s job is a lonely one, unless you get weird anthropomorphizing  those reindeer…

and if he had another guise, he would be well suited to a singular occupation out on his own.

I’ve covered Trucker Santa is some detail a couple months ago, so let’s turn to Cowboy Santa. Most little boys want to be one but not the other, why not the Sleigh-master as well?

Maybe cowboyism is just a hobby. Mike Jenkins sort-of sings “Santa and His Cowboy Sleigh” for children without an ear for music everywhere.

Charley Jenkins gets swinging with what-the-kids-might-say “If Santa Was a Cowboy.” It’s a fun danceable tune, but just ‘cuz he’s Texan–does that mean he’s gotta be into corporal punishment?!

Unconvincingly, Erik Alexander of Endless Hiway man-chants his version of country in “Santa is a Cowboy.” This booted-up version of ‘Night Before’ smells of barn.

In not quite a parody, Jackson Turner tells an involved I-hear-it-from-a-guy tale about how “Santa was a Cowboy.” It’s a gentle country ballad for listening next to a smoldering fireplace.

Red Sovine, that cool country western trucker singer, takes a shot at pinning down the kind of wrangler Santa is in “Santa Claus is a Texas Cowboy.” But i think someone put him up to it. Someone with lots of talentless children to sing back up. If they shoot like they sing, we’ll be safe.

Better (and more retro) is the over-orchestrated novelty “Cowboy Santa” by Larry Cartell. His Santa yodels too, but i believe he’s win the yodeling contest, this feisty fellow.

A lone fella with a guitar suits “Cowboy Santa” so much better for me. Neal harmonizes with Leandra for the chorus though, but despite a few fun word-plays his country tune brings me down. Seems that if Santa don’t stop messing around, Christmas will be ruent. I guess that’s more authentic country.

More mellow from back of the range Bill Lacey & The Ebonaires from Ebony Records 1959 mix guitar swing with doo wop harmonies in “Cowboy Santa Claus.” I hear the horse trotting in the tune, but it’s no hayburner.

The Prairie Ramblers harmonize nearly as well over the campfire for a more lively “Cowboy Santa Claus” (from Santa Fe this time). Now this is a Santa i’d watch in rollicking adventures before the feature film every Saturday at the moving picture show.